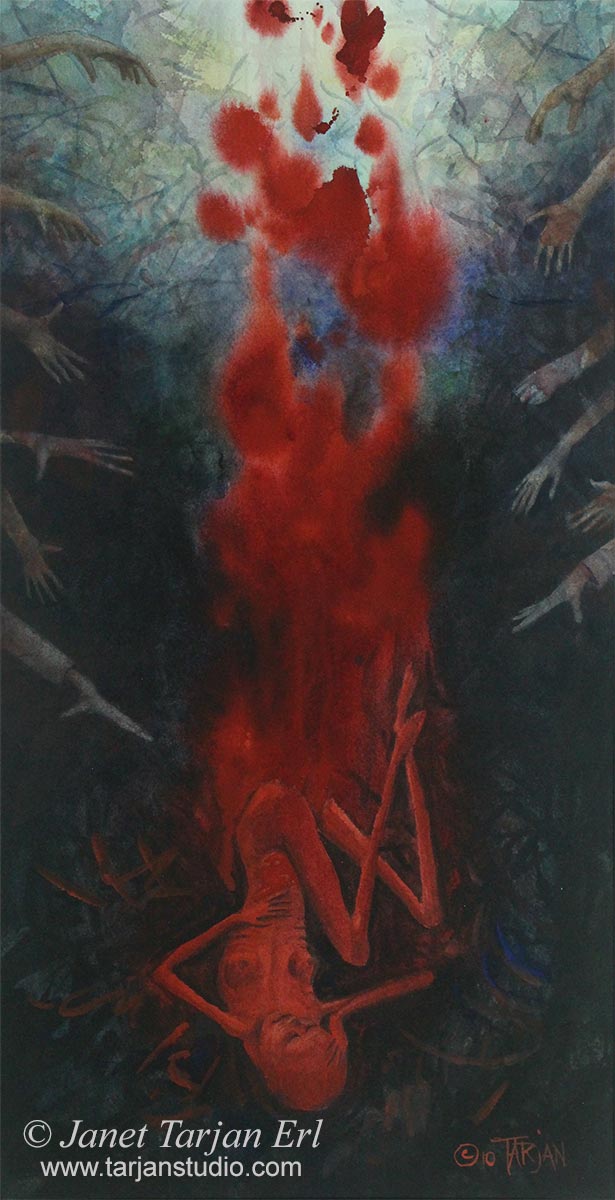 This painting is a depiction of the intense feeling of despair and loneliness I had when I was diagnosed with uterine cancer in 2005. All the red pigments represent blood because I was literally bleeding to death at that time. As I descended into despair, it felt like an abyss of darkness where no one could reach or help me – not my family nor my doctors.

Being told you have advanced cancer feels like a terrifying, unfair death sentence, and I don’t think I stand alone in that feeling. My mother died from cancer when I was in my twenties, and I watched her battle the disease three different times until she finally gave up trying. I browsed a collection of hundreds of artworks by female cancer patients, and the feeling that prevailed throughout most of those artworks was fear.

The fear a patient has is well substantiated because our medical approach to trying to cure the disease is brutal. It usually starts with surgery which is, then, followed by chemotherapy and/or radiation. Much of our western medical methods involve the destruction of dividing cells – which cancer cells are doing very rapidly – and this is why treatments of chemo and radiation are used because they destroy dividing cells. The problem with this approach is that the cure is also destroying a lot of healthy cells too. It’s this destruction of healthy cells that causes the vomiting – chemo is poison after all – or the intense damage to cells by radiation – which is burning your cells to death. What adds to the fear, is that the cure is usually never permanent, in fact, most patients with advanced cancers don’t live beyond a few years – in other words, they were never cured. That’s why cancer patients are so afraid. They fear dying in a drawn-out struggle with death where they have to endure physical brutality and emotional torment.

Until you are Sentenced with Cancer, you will never know how it feels. Trust me. You’ll never know.