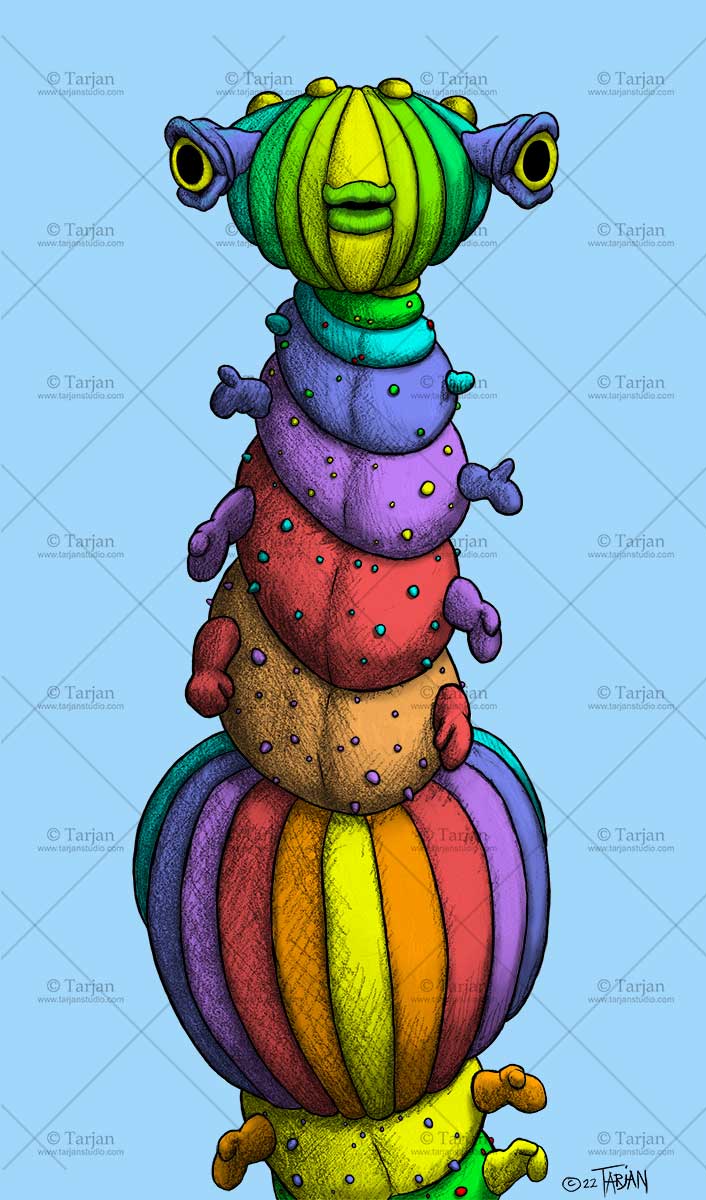 Pillas are color-morphic and can change colors and values instantly depending on their mood. Most of the time they are happy-go-lucky critters and radiate a rainbow of colors like this portrait of a happy Pilla fellow. Along their long segmented catapillar-like bodies they have several sections that can inflate into very large balloons that enable them to float. 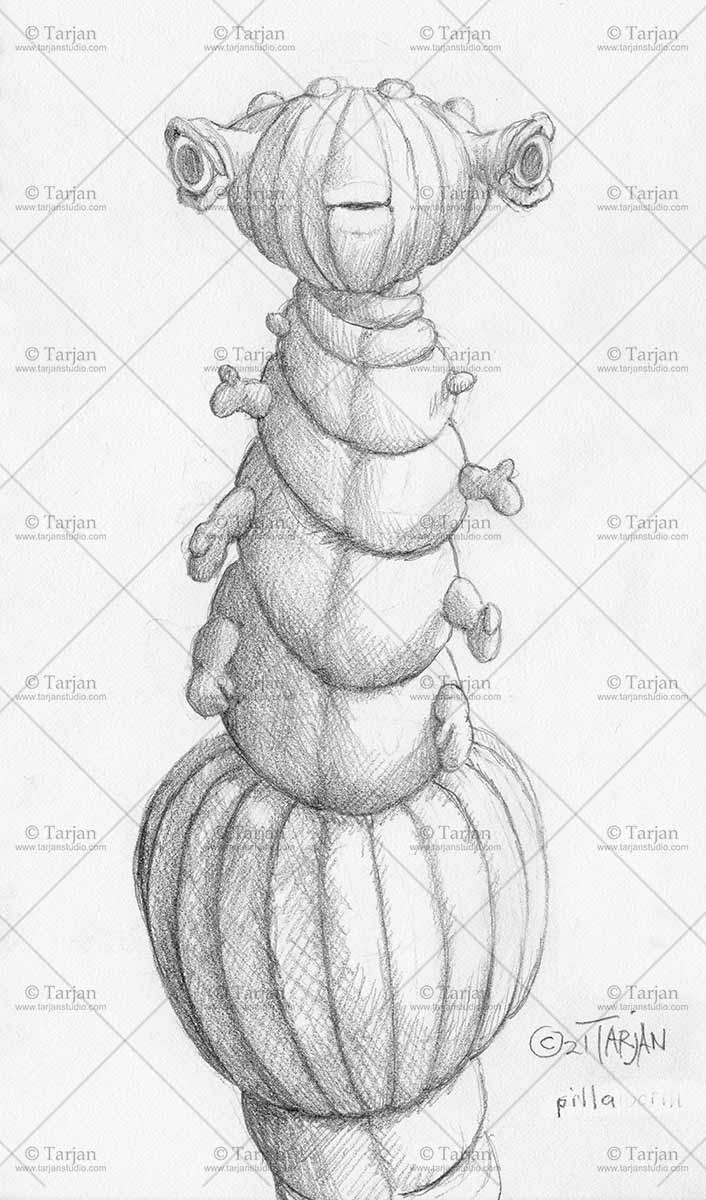 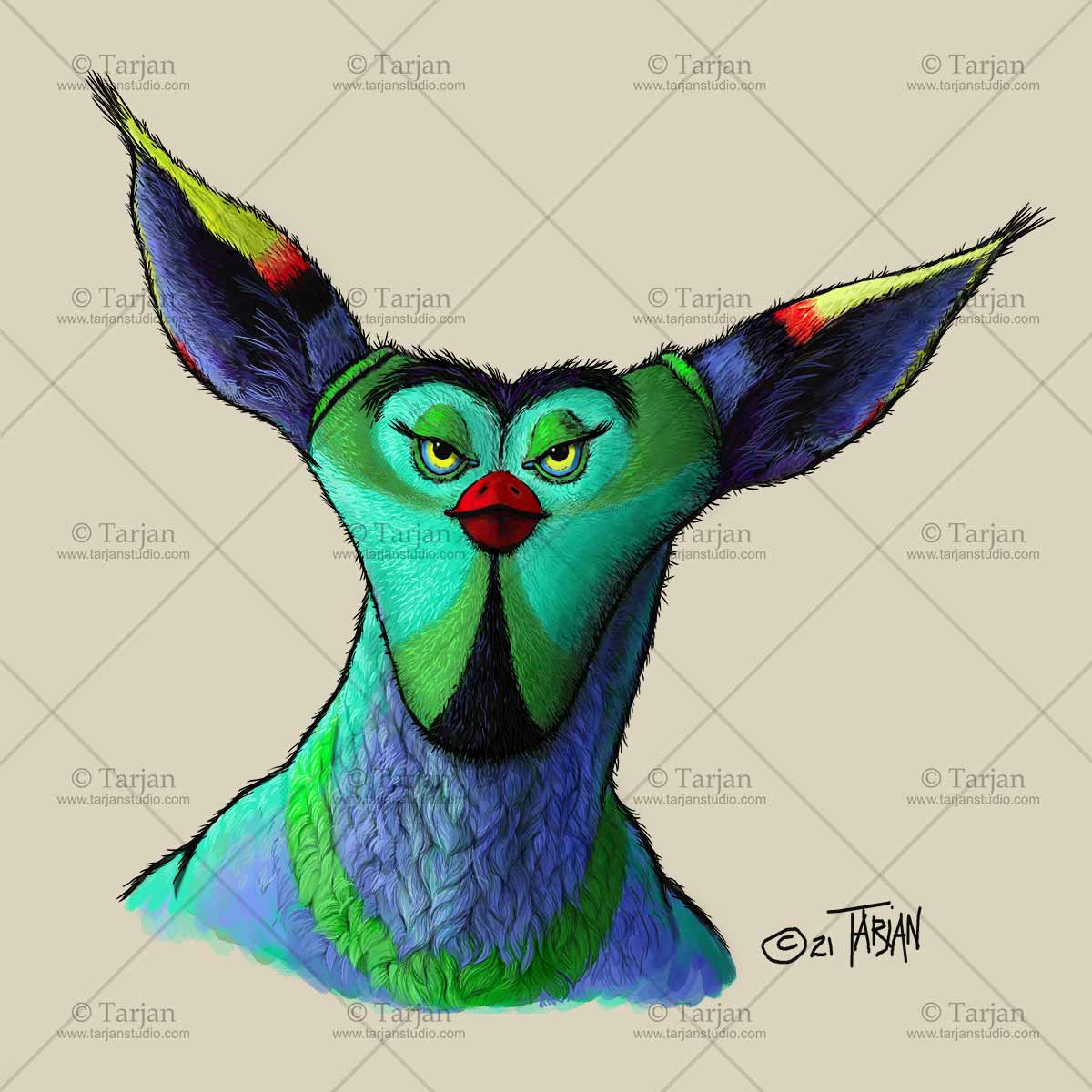 A Birdoggin is a cross between a bird-like creature and a dog-like creature. The males are colorful so that they can attract females. They are very proud, vain, and, in my opinion, very handsome. 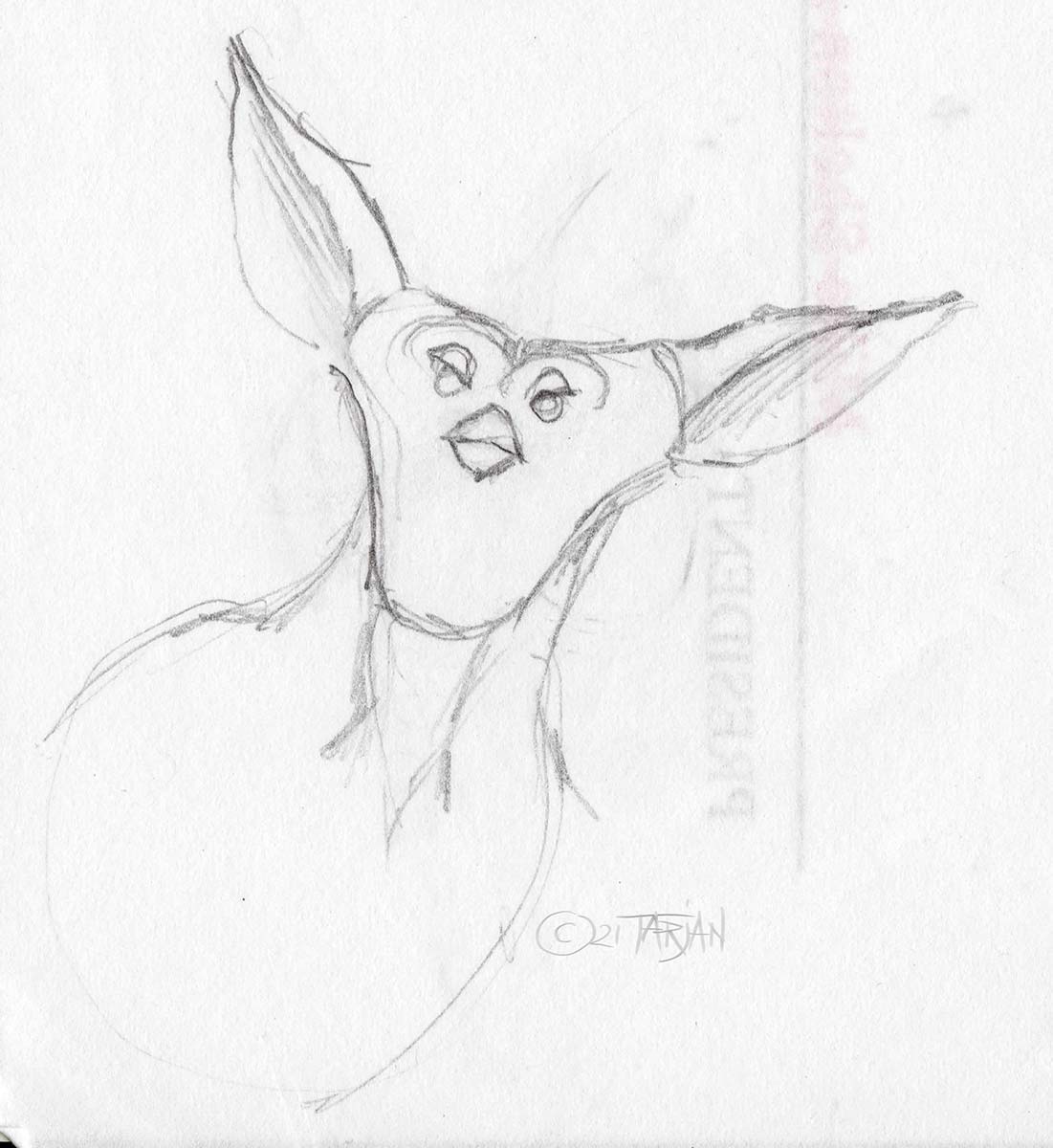 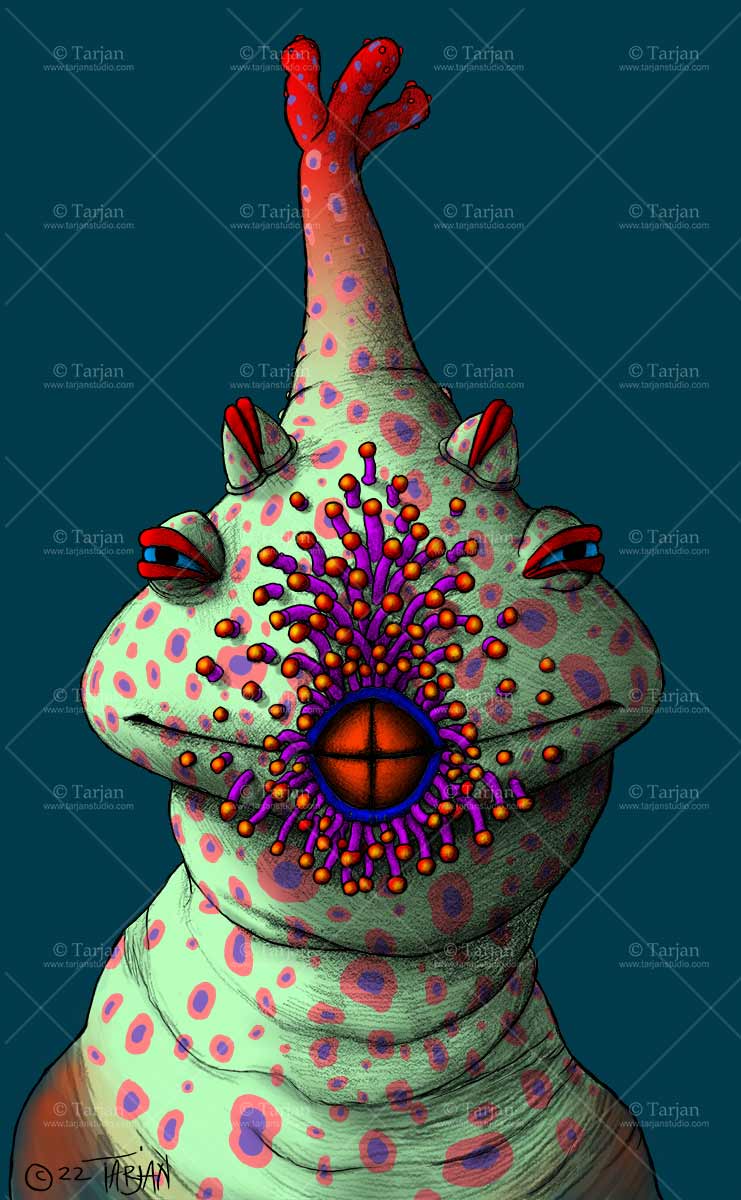 Barnipins are amphibious creatures with barnacle-like features and super sensitive whisker-like antennae. They really stand out in a crowd due to their colorful skin, but they are somewhat bashful. 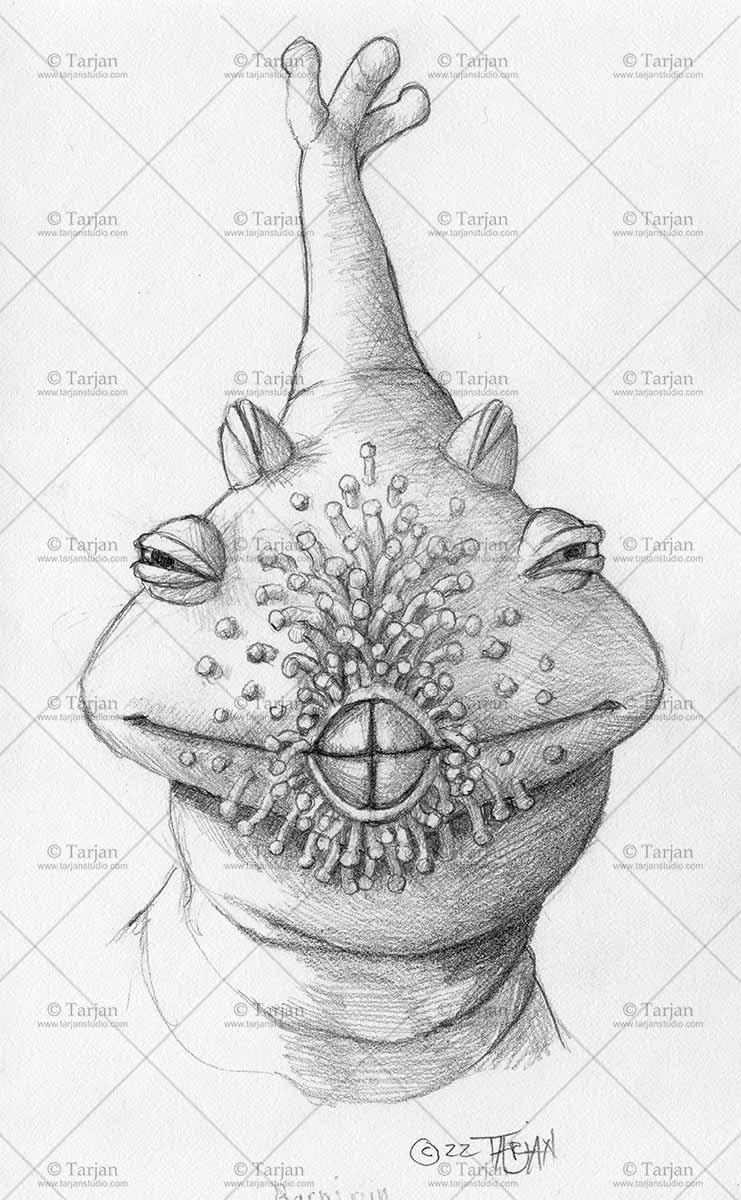 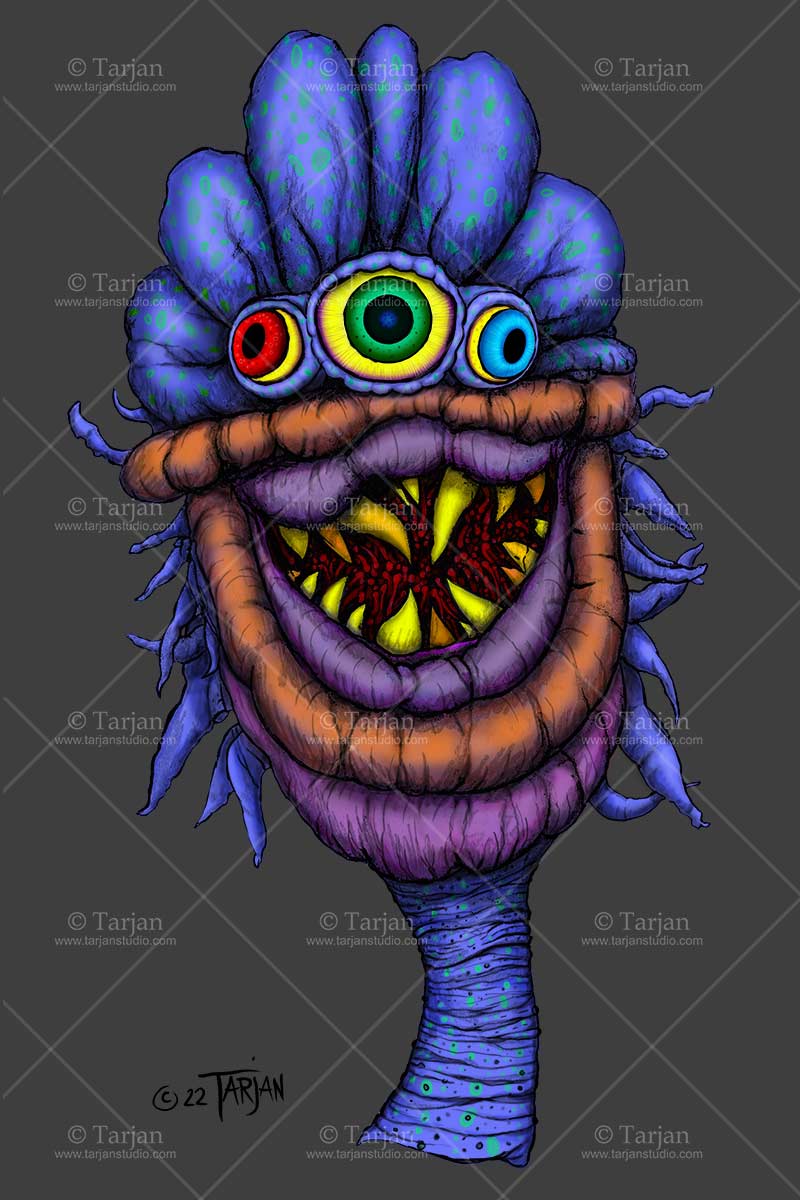 Yupyups are jolly critters with super sweet personalities. They are known to have voracious cravings for fruit. Fruit of just about anything you can image will transform them into lolly gagging fruitaholics. The sweeter and juicier the fruit the happier they will be. If you love fruit, hang out with a Yupyup, and they’ll find it far and wide by using their fruit scent sniffer lobes. 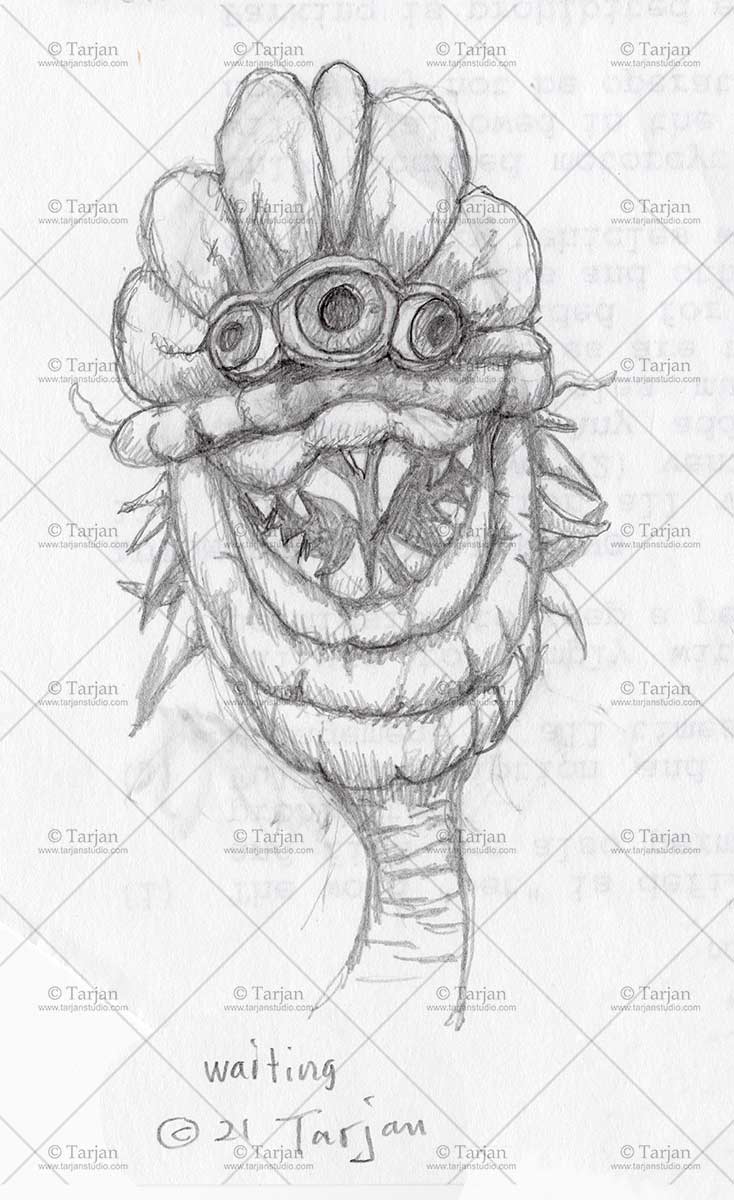 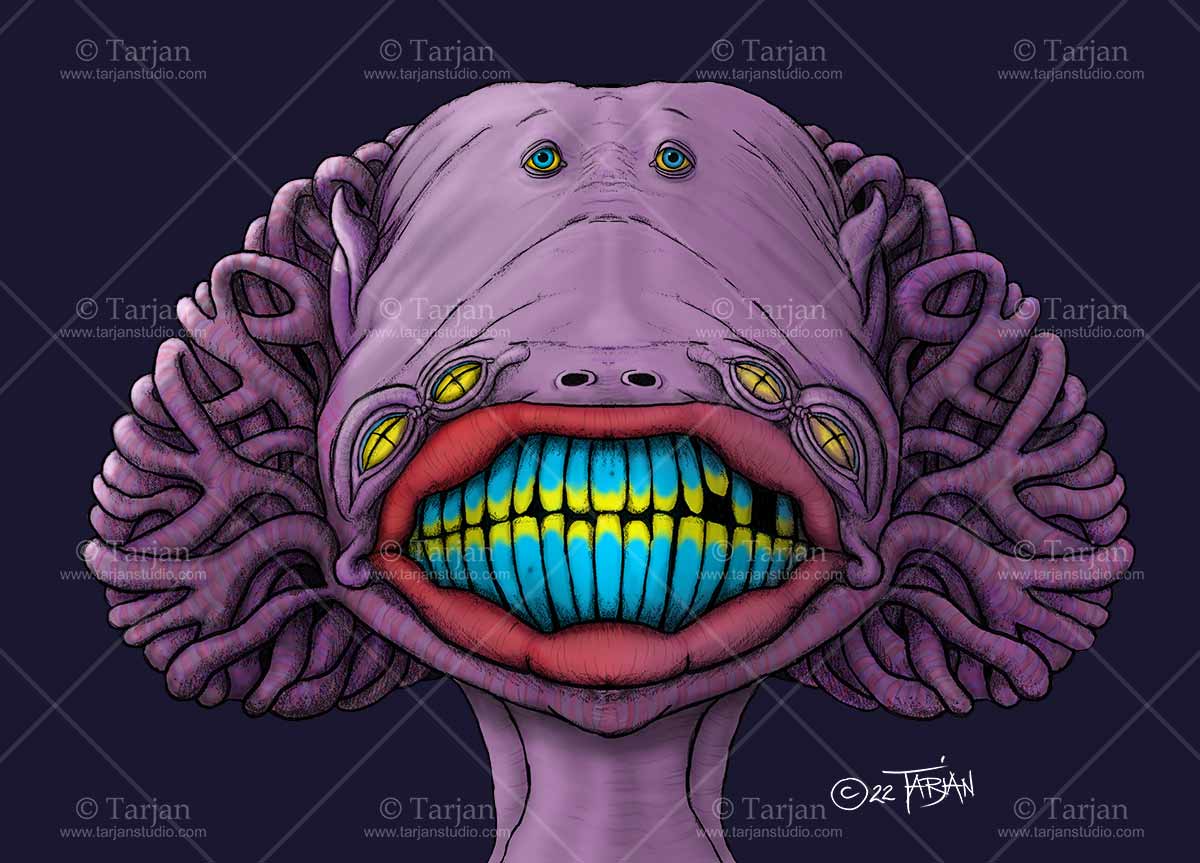 Rootarians are very talkative and, and they love to sing. In fact, the root-like cords that embellish their craniums have extraordinary vocal cord qualities that vibrate in harmony with their singing. They are not bashful. They became known as Rootarians because their craniums resemble root-like structures. 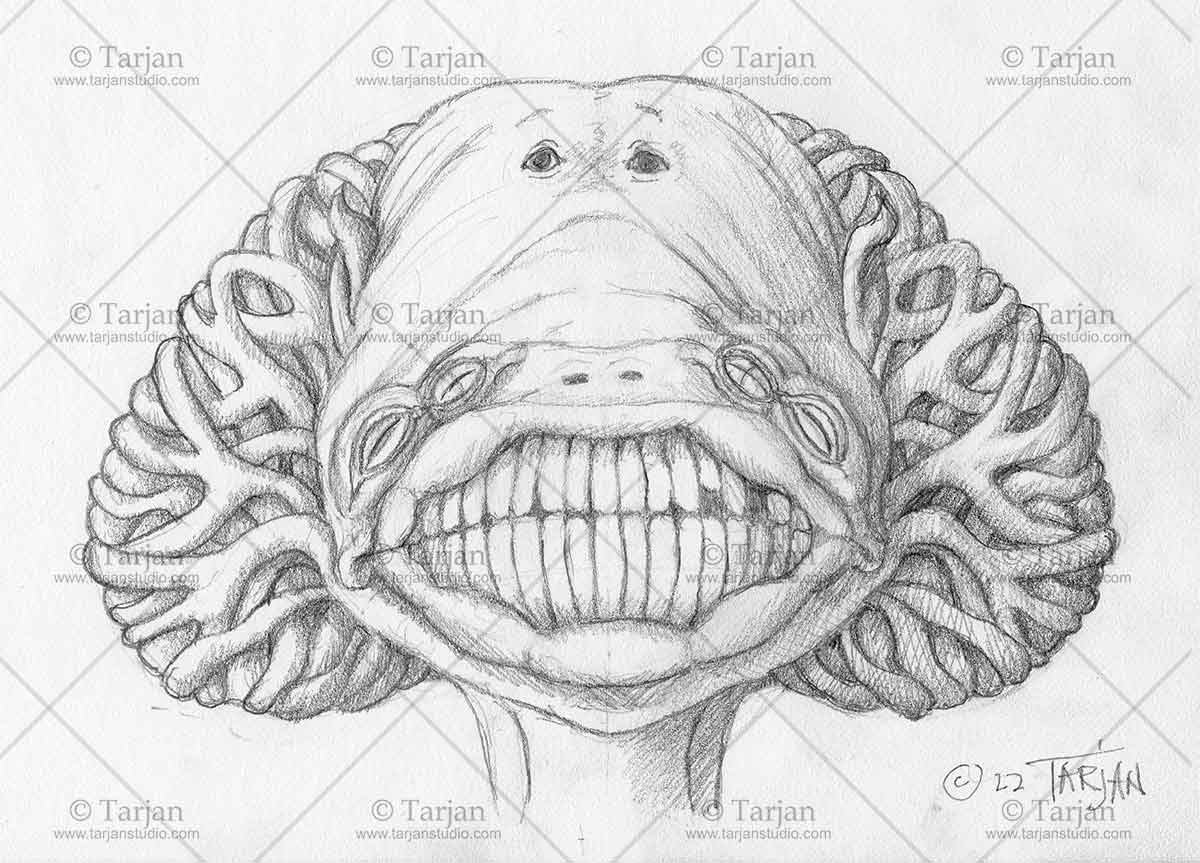 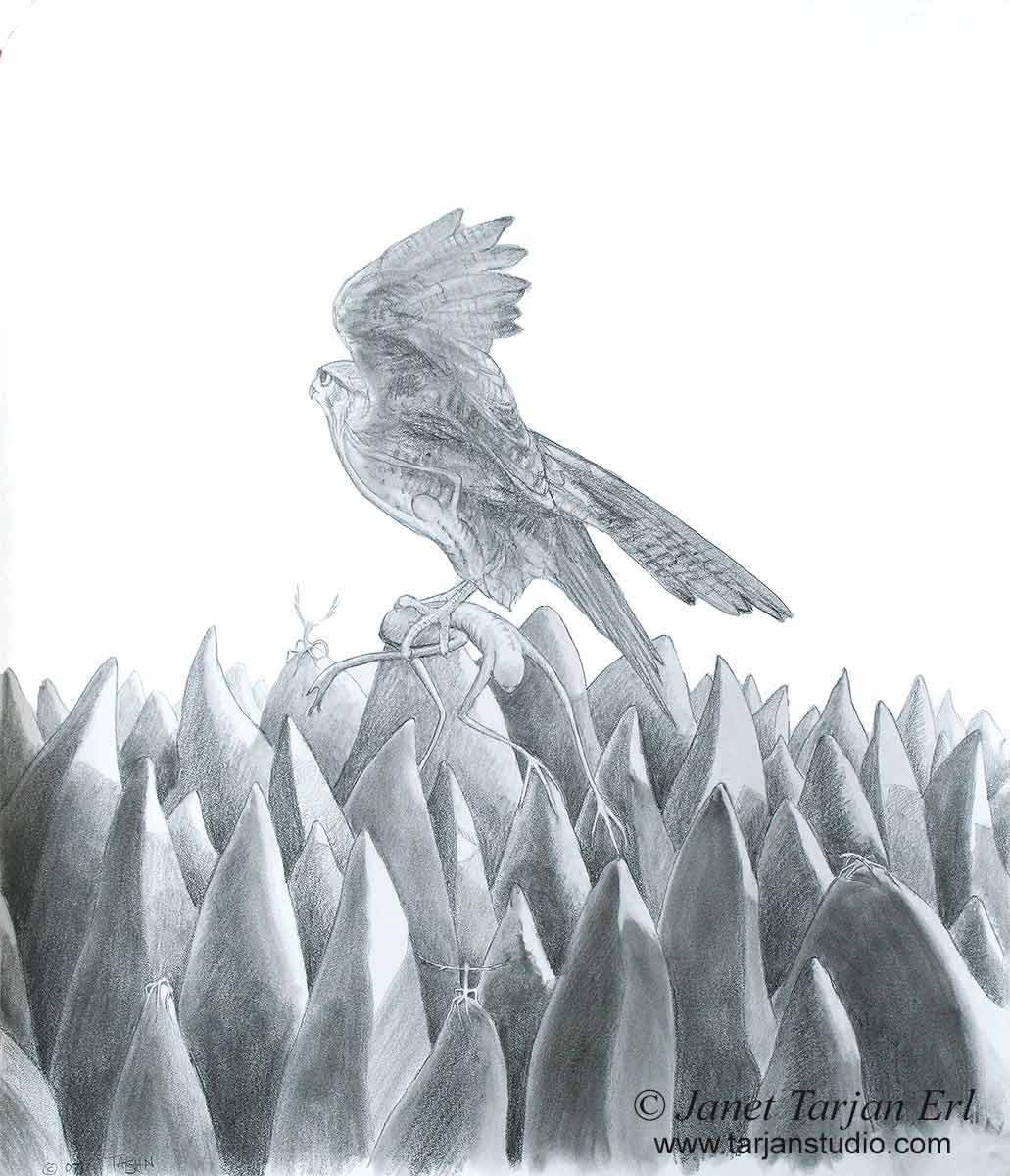 The drawing is a symbolic story about choosing to live or die as I experienced it. These were the choices I struggled with when I found out I had advanced uterine cancer and needed to do chemotherapy and radiation treatments. Having advanced cancer was a terrifying experience, especially when I found out that fewer than 2% of cancer patients with my stage of aggressive cancer survived beyond five years. Think of it this way, if you have a fifty-chamber revolver loaded with forty-nine bullets, would you want to play Russian roulette? Or it’s like being in a river gorge where you are surrounded by steep cliffs when a grizzly bear comes running towards you. You can’t climb up the cliff – it’s too steep, and the water is raging towards a deadly waterfall. Stay or swim, you feel doomed either way. That’s what cancer feels like-a lose-lose situation with no good choices to choose from.

Under such circumstances choosing to live was the most difficult choice I faced. It didn’t help that I had been depressed for several years prior to getting the cancer because I thought I was a failing artist. Ironically, getting the cancer, in my eyes, culminated into the biggest failure yet. It was hard to muster the will to live when my life was so screwed up, and having cancer gave me the perfect opportunity to let go. But living, in spite of all its failings, was so hard to let go of. Having cancer created the greatest challenge I ever faced. I had to choose whether to live or die and to fight or give up.

Though having cancer, at first, felt like being in the talons of a predator, in time, it transformed into being a great liberator because it freed me from the chains of my oppressive ego. For nearly all my adult life my identity and self-worth revolved around being a successful artist. When I wasn’t succeeding, I was failing, and the failures were adding up. It’s no wonder I got cancer. It was a wake-up call to warn me of the swampy, self-pitying muck I was sinking in.

Paring down my ego was not an easy task, however, and it wasn’t until I learned that the treatments often cause severe damage the nerves of the hands and feet – a problem known as neuropathy – a problem that would likely prevent me from ever painting again in my style because I wouldn’t feel my brushes and know how to control them for the precise details I love to create. Furthermore, I might lose the sense of my feet and my sense of balance which would really hamper my hiking and exploring. Getting cancer depression was inevitable. I wondered what I would be if I wasn’t an artist. I couldn’t imagine being anything else because I spent my whole life from the age of twelve becoming and being an artist. At that point, when I took stock of my life and tallied all my failures, calculated my odds of dying from cancer, and realized the two things I loved most – exploring and creating art – might only be memories. So, I bottomed-out and lingered in the darkest, suicidal place I’ve ever been.

As dark as that void was, though, obviously my life didn’t end there. In fact, the darkness faded as new hope appeared. I realized and accepted that there were many things I could do and enjoy. I could write or teach. I could do photography or computer art. I could design houses or alternative energy systems. I realized there were so many interesting things I could do, I actually got excited thinking I could pursue new careers. What initially felt like the sad end of my life ended up becoming the beginning of my new life, a life that was no longer judged by what I did. It allowed me to have value by just being alive without being labeled.

That was my turning point where I chose to fight for my life. I did do all the treatments, I did highly focused visualizations where I would see the physical changes and outcomes, I wanted my body to achieve, and I had amazing results that thrilled my care providers, and I expressed my thanks for being alive. In retrospect, my cancer brought my soul, mind, and body back together.

This drawing is in the permanent collection of the Woodsen Art Museum. 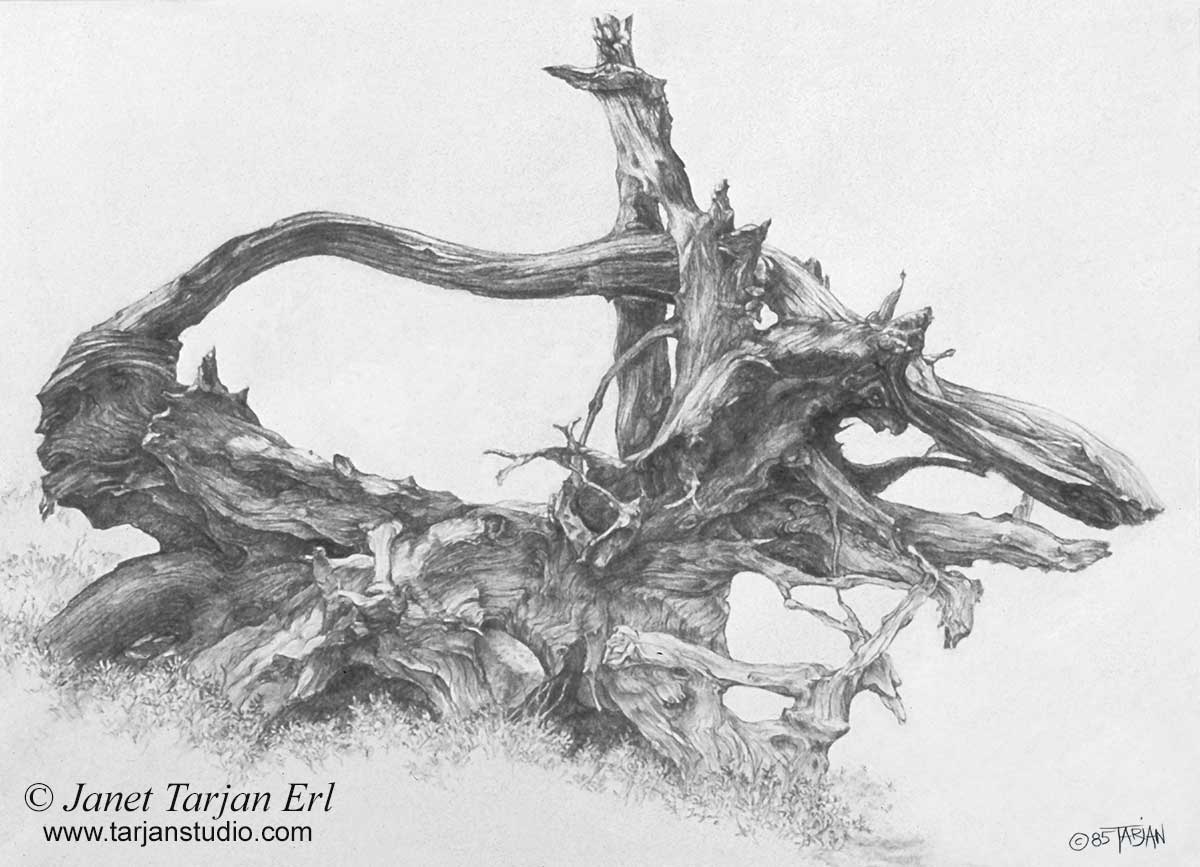 This pencil study of a Limber Pine root was drawn on location on the east side of the White Mountains, near Boundary Peak, Nevada. These trees can live up to 4,000 years, so I can only imagine how old this root was – maybe twice that age.